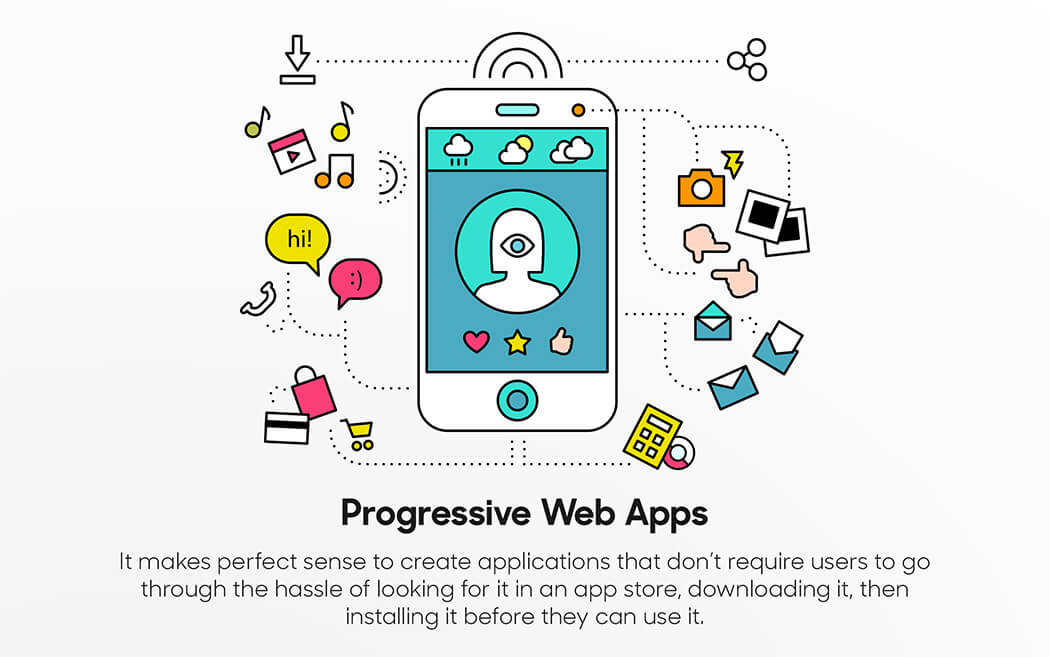 Do you know that Trivago experienced an increase of 150% for people who add its PWA to the home screen? This increased engagement led to a 97% increase in click outs to hotel offers. Along with this 67% of users continue to browse the site when they come back online. Isn’t it something interesting about PWA which defines it as a future of app development technology?

Do you know in a mobile app development process every step costs you 20% of the users? Amazed???

Let us see this through a funnel that would make it clear to you.

Have you see that the data that started with somewhat 85% ended to 30%. Every step results to decline in user percentage. As per the data of Localytics, 21%  of the users abandon the app after one use. Just imagine a developer or an app development company that puts best of its effort in building, developing and deployment could not even get the exact number of users who actually visit the app store to install an app.

The question here is what to do for the retention of users? Progressive Web Apps or PWA comes in rescue in such a case. As the user does not need to download the app in mobile for use, it sees great user retention. We can consider the above-mentioned example of Trivago here.

What is a Progressive Web App?

In the year 2015, Alex Russell and Frances Berriman (both Google Developers) coined the term “Progressive Web App.” The concept behind the technology was to provide comfort to the user in using an app in which he can access it through web browser without actually downloading or installing the app through PlayStore. If we will move according to technical definition then PWA is a hybrid between a traditional web page and a traditional mobile app.

Let us discuss some of the important features of PWA which makes it a choice for the start-ups and enterprises to take their businesses at the next level.

It is a JSON file that lets the developer control how and where the bookmark for the PWA appears on a user’s device. It countenances the user to experience everything from a unique icon for brand identification, a “waiting” display while the PWA opens up, and default display features for while site resources become available to ensure a seamless transition for the user.

Service Worker: Server Worker handles network requests and push messaging. It stores content for offline use and updates assets on the server. It is basically a JavaScript file run by the browser in the background, apart from the webpage, and controls events fired by the browser or webpage.

It is a system for holding network requests and their respective responses for retrieval at a later date.

As the progressive web apps are served through TLS connections they are more secure. They have good responsive functionality. Pages automatically adjust to the device type and screen size. They don’t require a visit to the app store.

The user can download it straight to the phone’s home screen for an easy install. The greatest feature of PWA is that the user stays locked in the content on their browser and in turn, gets wrapped up in an experience without interruption, especially when using application shell.

Let us get into a few of the benefits that make PWA much popular amongst the app development community.

# Saves Time and Money: PWA is developed only once whereas native app needs two developments namely for iOS and Android. Hence, it saves time as well as money

# No Need to Submit App on Store: App stores have strict guidelines for app submission especially iOS. A PWA does not need to go through the process and the web app can be uploaded easily.

# Less Memory Consumption: Since the user doesn’t have to download the app thus only a small portion of phone memory is used in using PWA.

# Can Be Optimized: As progressive web app is a website only it can be optimized for the search engines. Along with this, the latest algorithm developed by Google values PWA. In a nutshell, we can say that with the optimization of a PWA it is likely to appear in the first search results and hence can be well known by the users.

# Offline Use: Same as native apps PWA can also work offline. Brands can display offline products and content to keep the user engaged until the connection is back and running.

# Push Notification: Push notifications aids in reeling users back in hence gets a constant user’s engagement.

Twitter developed PWA with the goal of decreasing the bounce rate and data consumption while increasing Tweets sent and pages viewed per session in the year 2017.

Result of it was:

– 65% increase in pages per session

It has doubled the retention of web users with PWA.

There is always two sides of a coin. Mobile apps have though served many purposes of our life but the loopholes in it gave rise to Progressive Web Apps. The web development services companies are still working to make it better with new features. Let us see what the future of technology has in its goodie box for PWAs.

Follow Me
Nirmal Anandh
CEO at RAAM IT Solutions
Hi, this is M Nirmal Anandh from the "Temple City", Madurai. I am the Founder of this blog.My profession is, as a CEO in RAAM IT Solutions. It's about E-Publishing, Data Conversion and Data Entry Projects. you can connect with me @ Facebook, Twitter, Pinterest , LinkedIn, Flipboard, Medium and Youtube.
Follow Me
Latest posts by Nirmal Anandh (see all)
cache apiclassibloggerfeatures of PWAprogressive web appspwaTechnologyultimate guideweb appswebpage

One thought on “Progressive Web Apps: The Ultimate Guide”