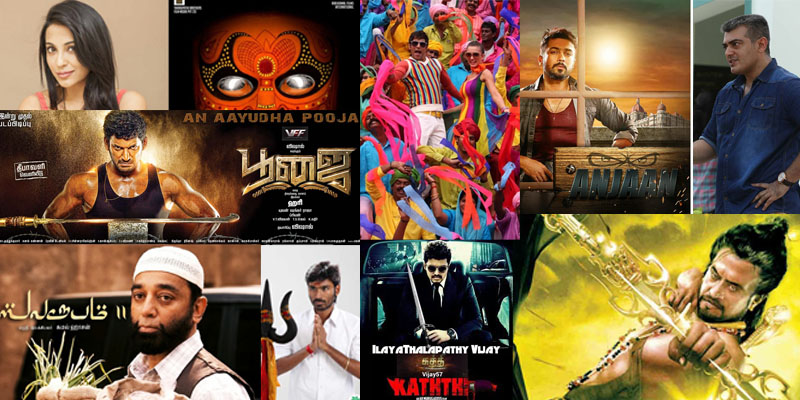 Following that, the second priority goes to Tamil Film Industry which makes movies in Chennai, Capital of Tamil Nadu. Tamil movies are very prominent and they attract large number of audience all over the world.

This is the article which comes up with the information about the latest Tamil movies in the upcoming season of 2014. This is an ideal panel of movies where you can find amazing new Tamil movies 2014 that will be releasing on 2014.

Be ready to enjoy action packed movies, romantic, thriller, suspense movies which are going to entertain you to the fullest. Hope these Upcoming lists of movies will definitely serve as a big treat for the Tamil Audience.

This is the “Most awaiting picture of the year” in India. This is the movie which has created a lot of expectations among super star fans across the nook and corner of the world!!

Kollywood is ready to welcome a new kind of film that Tamil audience are not used to, as Rajinikanth starrer Kochadaiyan, a 3-D animated motion capture film is ready to hit the screens on May 2014. The stage is getting ready for its grand release since it is a movie that is going to become a milestone film in terms of technology and budget.

This is the India’s first photorealistic 3-D animated motion capture movie. This technology is used in the Hollywood movies like Avatar, Pirates of the Caribbean and Tin Tin.

Rajinikanth who is also called as “Super Star” by his fans is the ultimate star of the masses and has wide range of audiences around the world especially Japan. He is a famous Indian actor, media personality, and cultural-icon. After being paid Rs. 260 million (US $4.3 million) for his role in the movie Sivaji (2007) he became the highest paid actor in Asia after Jackie Chan. He has bagged many state awards, best actor awards and India’s largest Civilian award called Padma Bhusan.

This movie is from another biggest Indian star named “Kamalhaasan”.  Vishwaroopam II is an upcoming Indian spy Thriller film which is simultaneously made in Hindi and Tamil. It is the sequel to Vishwaroopam I which was released in 2013 and a big blockbuster movie of the year. The sequel will reportedly be more entertaining than the previous one.

Kamal Haasan is a multi-talented artist in Indian cinema who is an Actor, screen writer, director, producer, playback singer, choreographer, and lyricist who works primarily for Tamil industry. He has won 4 national awards and 19 Film fare awards in India. His innovative acting has earned him the title the” first and perhaps the last complete hero in Indian cinema”.

This movie”I”(AI) is directed by the famous Indian director Shankar starring Vickram and Amy Jackson. The word “AI” has multiple meanings like “King, beauty, astonishment, guru, vulnerability, owner or arrow”. This is also one of the most awaiting films of this year. It is an Indian Tamil romantic action Thriller.

Actor Vickram is one of the best known Actors of Indian cinemas. He is one of the best actors known for taking diverse roles next to Kamal Haasan in Indian cinema. He has won 6 Film fare awards, one National award and State award for his best performance in many notable movies. He is an actor who strives hard for his career and has the ability to change his body weight according to the roles he is taking up.

National award winner Dhanush is going to work again with Vetrimataran in “Venghai sami” after their successful film “Adukalam”. This film is said to be taken in the forest area and it is going to be suspenseful thriller.

Dhanush is an Indian film actor, Producer, Singer who has won National award for best actor for the movie Aadukalam and in the same year he received international attention from his song “Why this kolaveri” which became the most viewed Indian song in YouTube. Dhanush has married Aishwarya who is the daughter of actor Rajini kanth.

This is rather another movie from Padmashree Kamalhaasan who is known as a best actor in Indian film industry. Just like his Vishwaroobam II, Kamal Haasan is also planning to release his  ”Uthama villain” this year end. The genre of this film is a full length comedy drama directed by his best friend Ramesh Aravind.

Along with these movies, there are several other movies like actor Vijay’s Kathi, Surya’s Anjaan and much awaiting Thala Movie releasing this year which going to add joy to our entertainment.