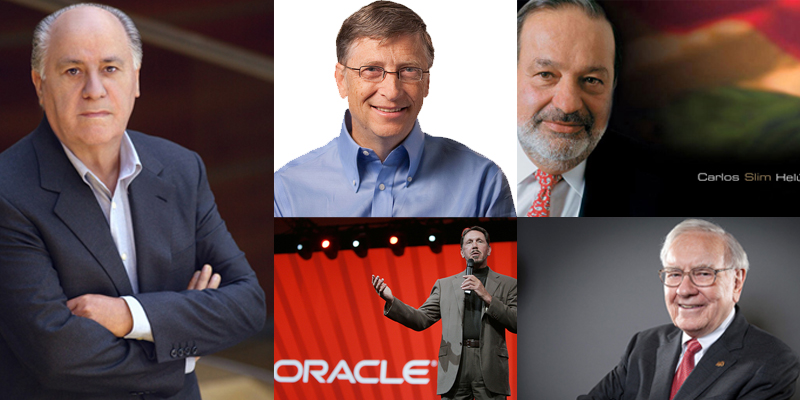 Anyone who comes across this title will definitely stop and ping into this content. Right?

For those who ping on this content the interesting news comes here. The ranks of World’s Billionaires have yet again been released having United States Billionaires in most of the leading places.

But at the same time, We Indians can also equally feel proud since the Indians such as Mukesh Ambani and Lakshmi Mittal are in the 22nd and 41st position respectively according to the 27th year of publishing of Forbes Billionaires list.

The Global Wealth Team of Forbes have clearly monitored and listed from the 1,426 names among which around 442 Billionaires are from United States of America. They have shortlisted the names who have an aggregate net worth between $4.6 Trillion Dollar and $5.4 Trillion Dollar. Following USA, Asia Pacific leaded with 386 Billionaires, Europe with 366 Billionaires and others from Middle East and Africa. And the list is below:

This man Carlos Slim Helu, a Mexican, still retains the title of “The world’s Richest Person” this year too. Last year 2012, his net worth was about $ 69 Billion and he has made a huge turnover through his surging stock prices at his financial arm, Grupo Financiero Inbursa, and his industrial and retail gaint Grupo Carso. He has retained his top spot for the fourth consecutive year.

Carlos born on January 28, 1940 in a Mexican City. He is a business magnet, philanthropist, and engineer who largely focused in telecommunications industry in Mexico. He has completed his professional engineering in civil domain at the National Autonomous University of Mexico.  In 1965, he incorporated Invesora Bursatil and became the chairman of the board of directors.  Later he incorporated Immobiliara Carso which later became Grupo Carso.

The Co-founder of Microsoft ranks second with $67 Billion dollars which is $ 6 Billion dollars more when compared to the previous year’s record. He has gained his profits from the investments like Ecolab, Republic services, and FEMSA.

Bill Gates was born on October 28, 1955. He did his higher studies at Harvard University where he met Paul Allen one of the co-founder of Microsoft. In 1975, Gates had left Harvard to form Microsoft with Paul Allen and the pair had planned to develop software for the emerging personal computer market.

Later, the company Microsoft became famous for their computer operating systems and killer business deals. Gates is the former Chief executive and current chairman of Microsoft.

Amancio Ortego, a Spanish Retail Guru has surpassed Warren Buffet and Bernaud Arnault, to become the world’s third richest man. His net worth has raised up to $ 19.5 Billion dollars than his previous year’s record. He holds 60% share of clothing retailer Inditex. The company, which operates under several brand names Zara, Massimo Dutti and Stradivarius has nearly 5,900 stores in 86 countries.

Amancio Ortego, born on March 28, 1936 is a Spanish Fashion executive and chairman of the Inditex fashion groups. He started as a delivery boy in a textile firm. He worked hard and learnt business overtime and made a huge success in the textile industry along with his wife when they co-founded Zara. It is said that he is such a workaholic and doesn’t wish to take any vacations at any time.

This person gets the third position every time but unfortunately this year Amancio has surpassed him. He is also from textile industry and bulk of his finances originates from that. Turning to 83 now, Warren is still not interested for the retirement.

Born on August 30, 1930 is a American business magnate and investor.  Buffet is called as “wizard of Omaha” since he is known for his frugality and simplicity. He is a close friend of Bill gates and donates regularly to the bill and Melinda Gates foundation.

The world’s Fifth richest man Larry Ellison is $ 7 billion wealthier than a year ago. In the past year, this software guru was into the real estate buying spree and acquiring properties in Malibu and he has just recently had added Hawaiian Airline Island to his holdings.

Born on August 17, 1944 at New york city, USA. He is the Chief Executive Officer of Oracle right now. It is said that Larry’s early days were so miserable since he contracted Pneumonia and his mother adopted him to his uncle and aunt. The fierce energy of this young chap even at the younger age has made him to learn all the rudiments in the computer programming. Later he and his partners had to develop a relational database model which later named to be Oracle and became hugely successful.

Above all, when noticing these richest persons you can find each one is a good philanthropist who comes forward for the social welfare and donates money for the goodness of the various states of people. Really proud to have such a good Big Bees!!

4 thoughts on “List of Richest Persons in the World”