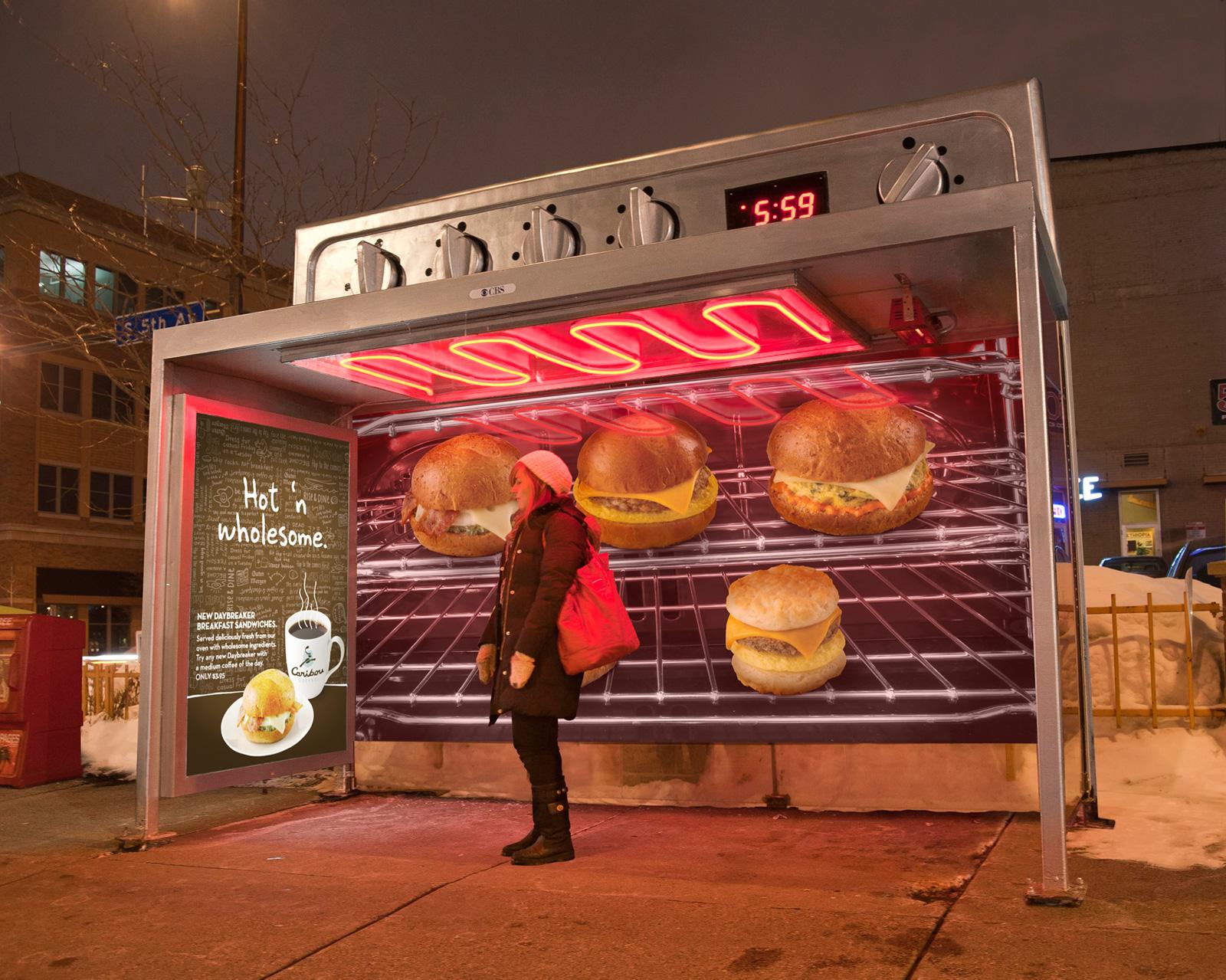 Commuting to and from work or town can seem monotonous at times. The daily grind, the cramped quarters, and the less-than-friendly individuals you’re sometimes forced to share them with. Even though it can feel like a pain, public transport is part of many peoples’ daily lives. According to the American Public Transportation Association, people board public transportation a whopping 34 million times each weekday. In fact, in 2017 alone, Americans took 10.1 billion trips on public transportation. When we look at London’s tube, the underground train welcomes around 1.35 billion passengers each year on average.

It comes as no surprise, given the amount of foot traffic they see, that bus and train stops are great places for brands to advertise. Public transport posters are highly visible, and passengers will have plenty of time to look at them while they’re waiting for their bus or train to arrive.

Having signage on or near a bus or train stop can be an incredibly smart move for a brand— but it must be executed correctly. Like the following examples prove, if marketers create a compelling enough ad, people will continue talking about it long after they’ve left the vicinity.

The selection of clever ads below will demonstrate how clever marketers capitalize on a great opportunity.

When this US coffee chain decided to add Daybreaker Breakfast Sandwiches to their menu, they cooked up (see what we did there?) something extra special to promote them. The ColleMcVoy agency transformed transit shelters around Minnesota into “ovens,” with working timers and heaters. This drew commuters’ attentions to Caribou’s “hot ‘n wholesome” new offerings while providing cozy sanctuaries to help keep Minnesotans warm during the cold winter months. Now that is clever marketing and an efficient use of space! 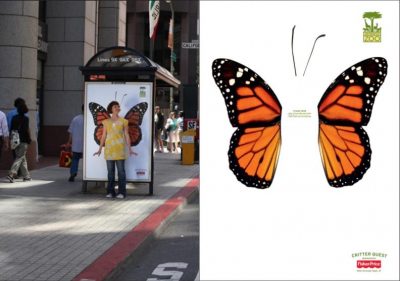 Who doesn’t love amazing animals and incredible insects? And, in today’s age, who doesn’t love the thought of becoming the subject of a renowned digital campaign? Enter the San Francisco Zoo’s “Critter Quest”, created by the agency BBDO West. These print ads were posted on bus shelters around the San Fran area, and featured human-sized animal/insect parts (peacock feathers, butterfly wings, giraffe horns) that people could stop and take pictures with, for their chance to be featured online and in print. This is a great ad because it is not only visually appealing— it is engaging, and made passersby stop, look, and enjoy. 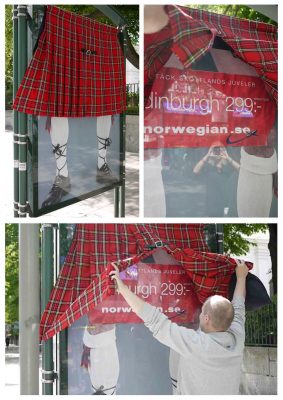 Via Ads of the Word

When Norwegian Airlines launched a new route to Edinburgh, they decided to create a bus shelter poster that would really make people want to stop and explore. The ad (created by Volt AB in Stockholm) looks like a man’s legs when dressed in a traditional Scottish kilt.

The kilt, however, is made of real cloth and can be lifted up to reveal the great news below it— that Norwegian air is offering tickets to Scotland at unbeatable prices! The ad is creative, intriguing, and could certainly tempt passersby to book a trip to the land of tartan, bagpipes, and kilts! 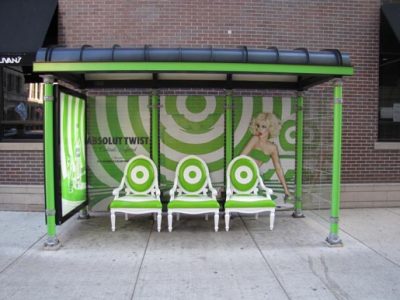 Via The Inspiration Room

When it comes to print ads, plenty of liquor brands have garnered attention throughout the years. One such is Absolut Vodka, when they turned a selection of Chicago bus shelters into mini lounges based on different drink themes. These shelters by TBWA\Chiat\Day in NYC had special seating, coordinating print backgrounds, custom paint jobs and even live plants and greenery! Not only were these trendy hubs fun destinations for commuters, they likely left everyone wanting to see (or taste!) more from the brand. 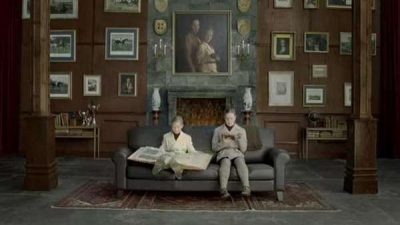 Commuters on Paris’s subway were treated to makeshift living rooms, complete with furniture, complements of IKEA. Printed backdrops hung behind plush furnishings, creating the look of an actual living room. Commuters were able to stop, enjoy the view, take repose on the couches/chairs, and get a glimpse into what their homes could look like if they shopped at IKEA. The ads were attention-grabbing as well as useful (who doesn’t appreciate a comfortable perch during their travels?) and were created by the brains at Ubi Bene agency. 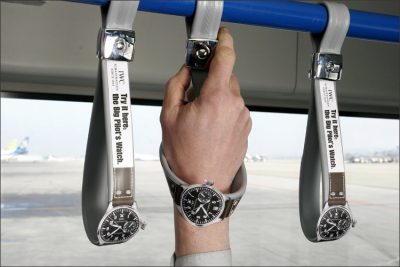 The minds at Jung von Matt/Alster had the idea to equip subway car straps with visuals of IWC’s Big Pilot’s Watch. That way, when riders went to grab hold of the straps, they’d be able to see what their wrist would look like adorned with one of the brand’s best selling products. This “try before you buy” strategy is an effective way to get people thinking about your products and excited to try them on for real. 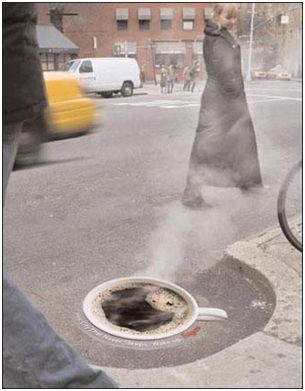 The Folgers marketing team decided to make use of NYC’s natural scenery— and it worked brilliantly! The team placed pictures of coffee cups over some of the city’s manhole covers, so that when the natural steam came out it would appear that it was coming from a steaming hot cup of joe.

The words around the cup read “Hey, City That Never Sleeps. Wake up.” Busy commuters on their way to work early in the mornings could see this and be tempted to wake up with Folgers. While these ads technically weren’t in bus stops, we felt these posters should be included because of the fact that they aim to capture the same commuter attention. 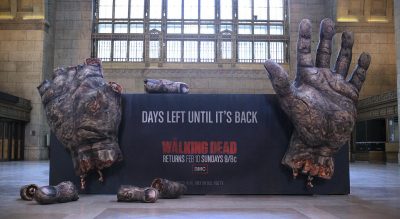 Via Ads of the World

Subway riders in Canada were surprised by a scary zombie exhibit to promote the famous zombie TV show, The Walking Dead. Two giant zombie hands were placed on either side of a poster, as a countdown to the days until the show’s season premiere. Each day that passed, a zombie finger was cut off, until it was finally launch day. The ad also included real-life “zombies” (actors dressed in full zombie costumes) to terrify and further grab the attention of passersby. The Toronto agency Leo Burnett was responsible for this unique installation. 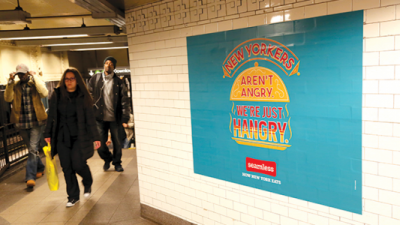 New Yorkers are often portrayed as people who might not have a lot of patience as they’re on their way to take the world by storm. Let’s just say you wouldn’t necessarily want to get in the way of a busy New Yorker. Well, the food delivery brand Seamless played on this stereotype in their recent campaign. Posters throughout NYC’s subway stations read “New Yorkers aren’t angry. We’re just hangry.” The advertisement injected some humor into the days of busy commuters, and served to capture the spirit of the millennial generation. The agency BBH New York was behind these clever posters.

Sometimes, people just want to look at something pretty. Can you blame them? Luckily, when you’re one of the world’s most famous art museums, you have the perfect opportunity to display your beautiful pieces. This is what happened recently when the MOMA partnered with the OUTFRONT media company. In a series of three-part subway posters, the MOMA showed off some of the artworks that make it what it is. This was a great way to bring attention to the museum and tempt commuters into visiting.

The Coca Cola company has always been on the cutting edge of advertising, jumping from one innovative campaign to the next. When the brand launched its new and improved “grip” bottle in France, it placed Velcro onto its print ads, literally catching commuters and their attention.

The sticky situation these ads created served to create a buzz around the product launch, and give the French public something unusual to experience while they wait for their bus. While we wouldn’t want to come near these posters in our wooly winter sweaters, we salute the clever marketers at Marcel, France who devised this interactive ad.

Have you had the pleasure of seeing any interesting bus/subway posters in person? The above are just a selection of the many thought-provoking  posters that creative marketers have made possible. If these prove anything, it’s that it pays to think outside the box when it comes to promoting your products or services. If you’re feeling inspired, we’d love to work with you to create affordable and effective print ads for your business. 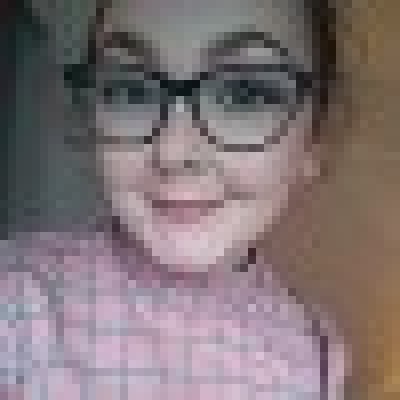 Claire Newton
Marketing Executive at Design Wizard
Currently working as a Marketing Executive at Design Wizard, Claire is passionate about creating amazing content and bringing people together. Having recently graduated with her masters degree in Marketing she is keen to impact the digital world. Outside of work you can catch Claire taking photos of her rescue dog Storm and checking out social media.

All about AWS partnership

Clean a carpet: Grandma’s tips to prolong its life!