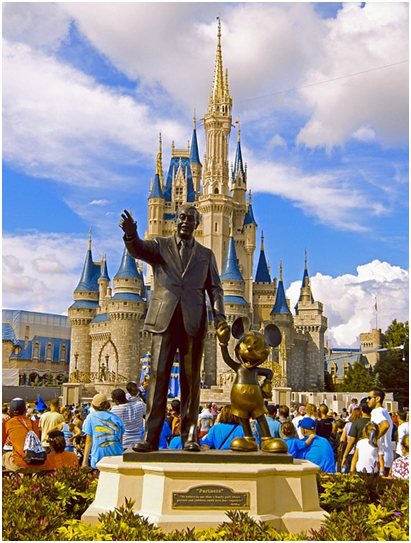 Perhaps almost every person at least once watched the cartoon of famous Walt Disney Animation Studios, a leader in the American animation industry. Disney was founded on October 16, 1923. And since then, the brand has become firmly associated with the colorful world of childhood.

The company has produced a collection of cartoons kids from all around the world love so much. Walt Disney himself was an extremely atypical person, but still, he is probably one of the most influential Americans who ever lived.

There are numerous Disney hidden secrets in cartoons. Therefore, it was not difficult for us to find these 7 fun facts about Walt Disney films:

When Walt Disney was developing Mickey Mouse, his original idea was to name him Mortimer. But Walt's wife convinced him to change it to "Mickey." Mortimer ended up being the name of a new character — Mickey's rival. Initially, Mickey was a silent character, but his next presence at “Steamboat Willie” had background music and sound.

The first words Mickey ever spoke in a cartoon were: "hot dogs, hot dogs!" Mickey Mouse was given his star on the Hollywood Walk of Fame in 1978 to celebrate his 50th anniversary.

2. The Success of Snow White and the Seven Dwarfs

The first full-length cartoon in history was the animated picture "Snow White and the Seven Dwarfs" created by Walt Disney. More than 570 animators worked on its creation over three years. To speed up their work, the artists were divided into groups – some of them drew key elements, others supplemented them with details.

The result was spectacular – the cartoon remained the highest-grossing film of all time for a long time. Its distribution exceeded $100 million dollars, and also brought the creator next Oscar. The cool fact is that this cartoon won Walt Disney a very special honorary Oscar: it consisted of one full-sized statuette and seven miniature ones.

Some of the characters were modeled after these real life actors. Aladdin's Genie was inspired by the beloved comedian and Academy Award-winning actor Robin Williams. It's been long rumored that Tink's model was Marilyn Monroe, but that's not true, according to many sources. The real inspiration for the pixie fairy is Margaret Kerry, who worked as the live action model for the character.

Alyssa Milano inspired the face and personality of Ariel in The Little Mermaid. However, the body and animation for Ariel were modeled after Sherri Stoner, a producer for Disney who later would also be an animation model for Belle.

The characters of the Beagle Boys and Ma Beagle from Walt Disney's "Duck Tales" are written off from the bandit group that actually existed in the 1930s "Barker-Karpis Gang," headed by Ma Barker. "Barker-Karpis Gang" was one of the most daring criminal gangs of its time. They have made a lot of bank robberies, murders, and kidnappings.

The gang and its members have become prototypes for many gangster movies and books, for example, the film "Public Enemies" with J. Depp in the title role tells about one of the members of "Barker-Karpis Gang," John Dillinger. The Barker-Karpis Gang was one of the longest-lived criminal gangs during the Depression Era

Cartoon "Wall-E" can be named as one of the most charming ever created stories about love (and one of the most depressive, by the way). The protagonist of the cartoon film is Wall-E, an adorable little robot that cleans up garbage on an abandoned planet, formerly known as Earth. People were forced to leave the planet because of pollution, and during the cartoon, they become too lazy and fat to return to the planet again.

This cartoon became so popular due to dangerous environmental issues humanity faced recently what can be found in Edu Birdie research. An important fact is thatWall-E is named after Walter Elias Disney, the founder of the Walt Disney Pictures film company.

6. Naughty Moment in The Rescuers

To the weird facts about Walt Disney cartoons, we can include that in The Rescuers there is a quick moment with an image of a topless woman in the background. The company admitted it and 3.4 million copies were recalled.

One more article you may find interesting is Walt Disney’s Miracle: The History Of Amusing Cartoon Maker.

7. Toy Story' has a crazy reference to 'The Shining.'

Sid from Toy Story, the creepiest animated child ever, has some hallway carpet with the same design as one of the carpets in The Shining. Production designer Ralph Eggleston loved the Stanley Kubrick film and created a fantastic nod to a surreal horror classic — an apt reference since Sid is a surreal villain in his own right.

We hope you liked these interesting facts about Walt Disney films!